Postersession: The Low Dimensionality of Development 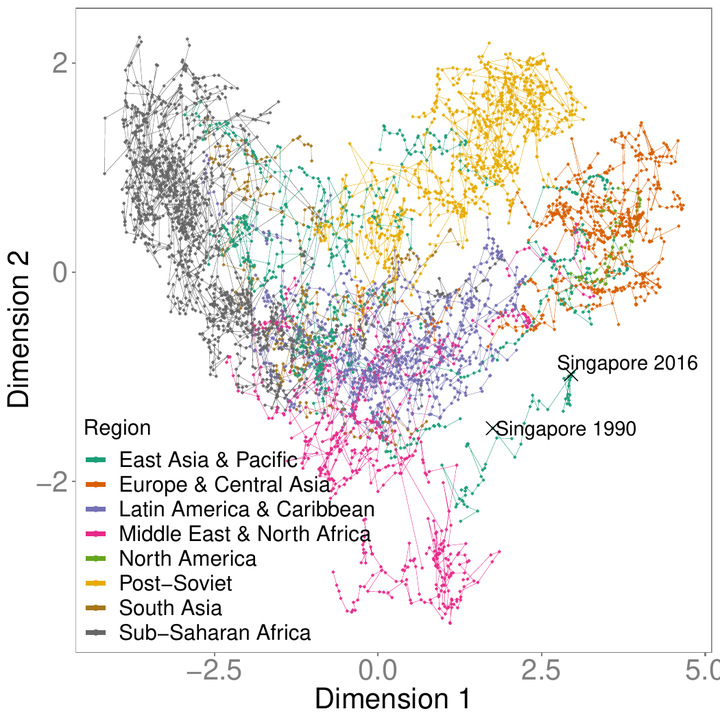 The World Bank routinely publishes over 1500 “World Development Indicators” to track the socioeconomic development at the country level. A range of indices has been proposed to interpret this information. For instance, the “Human Development Index” was designed to specifically capture development in terms of life expectancy, education, and standard of living. However, the general question which independent dimensions are essential to capture all aspects of development still remains open. Using a nonlinear dimensionality reduction approach we aim to extract the core dimensions of development in a highly efficient way. We find that more than 90% of variance in the WDIs can be represented by solely five uncorrelated dimensions. The first dimension, explaining 74% of variance, represents the state of education, health, income, infrastructure, trade, population, and pollution. Although this dimension resembles the HDI, it explains much more variance. The second dimension (explaining 10% of variance) differentiates countries by gender ratios, labor market, and energy production patterns. Here, we differentiate societal structures when comparing e.g. countries from the Middle-East to the Post-Soviet area. Our analysis confirms that most countries show rather consistent temporal trends towards wealthier and aging societies. We can also find deviations from the long-term trajectories during warfare, environmental disasters, or fundamental political changes. The data-driven nature of the extracted dimensions complements classical indicator approaches, allowing a broader exploration of global development space. The extracted independent dimensions represent different aspects of development that need to be considered when proposing new metric indices.

My research interests include the interactions between society and biosphere. I have been working on the extraction of the global dynamics of ecosystems and society. I have an interest in using machine learning and multivariate statistics to understand the behavior of complex systems.